1. A client rates her satisfaction with her vocational counselor on a 4-point scale from 1 = not at all satisfied to 4 = very satisfied. What is the:

2. Give the  level  of  measurement  for  each  of  the  following  variables:

• ethnic group to which a person belongs,

• number of times an animal makes a wrong turn in a maze, and

• position one finishes in a race.

3. Fifty students were asked how many hours they had studied this weekend. Here are their answers:

• a frequency table and

• make a histogram and

• describe the general shape of the distribution.

4. Below are the number of minutes it took each of a group of 10-year-olds to do a series of abstract puzzles:

• a frequency table and

• Based on the grouped frequency table,

•  make a histogram and

• describe the general shape of the distribution.

5. Describe the shapes of the three distributions illustrated below.

6. (a) Describe an explain the differences between the mean, median,  and mode.

(b)Make up an example (not in the book or in your lectures) in which the median would be the preferred measure of central tendency.

7. (a) Describe the variance and standard deviation.

(b)Explain why the standard deviation is more often used as a descriptive statistic.

As part of a larger study, Speed and Gangestad (1997) collected ratings and nominations on a number of characteristics for 66 fraternity men from their fellow fraternity members. The following paragraph is taken from their “Results” section:

12. Explain these results as if you were writing to a person who has never had a course in statistics. Specifically,

(a) explain what is meant by a correlation coefficient using one of the correlations as an example;

explain in a general way what is meant by “significantly” and “not significantly”, referring to at least one specific example; and

speculate on the meaning of the pattern of results, taking into account the issue of direction of causality.

13. Gable and Lutz (2000) studied 65 children, 3 to 10 years old, and their parents. One of their results was “Parental control of child eating showed a negative association with children’s participation in extracurricular activities (r = .34; p < .01).” Another result was “Parents who held less appropriate beliefs about children’s nutrition reported that their children watched more hours of television per day (r = .36; p < .01).” (Both quotes from page 296.) Explain these results as if you were writing to a person who has never had a course in statistics. Be sure to comment on possible directions of causality for each result.

14. For each of the following, (a) through (d), determine the raw-score prediction model. Then make a single graph showing all the regression lines, labeling each by its letter. (Be sure to make your graph large enough so that the lines are clearly separate.)

• What kind of sampling method is this?

• What is a major limitation of this kind of approach?

16. A large study of how people make future plans and its relation to their life satisfaction (Prenda & Clachman, 2001) obtained their participants “through random-digit dialing procedures.” These are procedures in which phone numbers to call potential participants are selected at random from all phone numbers in a particular country. Explain to a person who has never had a course in statistics

• why it may be a problem if not everyone called agreed to be interviewed.

17. Suppose that you were going to conduct a survey of visitors to your campus. You want the survey to be as representative as possible. How would you select the people to survey? Why would that be your best method?

19. List five  steps  of  hypothesis  testing  and  explain  the  procedure  and  logic  of

20. When a result is significant, explain why is it wrong to say the result “proves” the research hypothesis?

• say what two populations are being compared,

• state the null hypothesis, and

• say whether you should use a one-tailed or two-tailed test and why.

• In an experiment, people are told to solve a problem by focusing on the details. Is the speed of solving the problem different for people who get such instructions compared to people who are given no special instructions?

• Based on anthropological reports in which the status of women is scored on a 10-point scale, the mean and standard deviation across many cultures are known. A new culture is found in which there is an unusual family arrangement. The status of women is also related in this culture. Do cultures with the unusual family arrangement provide higher status to women than cultures in general?

22. A researcher predicts that listening to music while solving math problems will make a particular brain area more active. To test this, a research participant has her brain scanned while listening to music and solving math problems, and the brain area of interest has a percent signal change of 58. From many previous studies with the same math-problems procedure (but not listening to music), it is known that the signal change in this brain area is normally distributed with a mean of 35 and a standard deviation of 10. Using the .01 level, what should the researcher conclude? Solve this problem explicitly using all five steps of hypothesis testing and illustrate your answer with a sketch showing the comparison distribution, the cutoff (cutoff), and the score of the sample on this distribution. Then explain your answer to someone who has never had a course in statistics (but who is familiar with mean, standard deviation, and Z scores).

23. In an article about anti-tobacco campaigns, Siegel and Biener (1997) discuss the results of a survey of tobacco usage and attitudes, conducted in Massachusetts in 1993 and 1995; Table 6-2 shows the results of this survey. Focusing on just the first line (the percentage smoking >25 cigarettes daily), explain what this result means to a person who has never had a course in statistics. (Focus on the meaning of this result in terms of the general logic of hypothesis testing and statistical significance.)

25. In a planned study, there is a known population with a normal distribution, μ = 15, ơ = 2. What is the predicted mean if the researcher predicts

• sketch the distributions involved, showing the area for alpha, beta, and power.

explain your answer to someone who understands hypothesis testing with means of samples but has never learned about power.

27. You read a study that just barely fails to be significant at the .05 level. That is, the result is not significant. You then look at the size of the sample. If the sample is very large (rather than very small), how should this affect your interpretation of

28. You are planning a study that you compute as having quite low power. Name five things that you might do to increase power.

29. Evolutionary theories often emphasize that humans have adapted to their physical environment. One such theory hypothesizes that people should spontaneously follow a 24-hour cycle of sleeping and waking – even if they are not exposed to the usual pattern of sunlight. To test this notion, eight paid volunteers were placed (individually) in a room in which there was no light from the outside and no clocks or other indications of time. They could turn the lights on and off as they wished. After a month in the room, each individual tended to develop a steady cycle. Their cycles at the end of the study were as follows: 25, 27, 25, 23, 24, 25, 26, and 25.

Using the 5% level of significance, what should we conclude about the theory that 24 hours is a natural cycle? (That is, does the average cycle length under these conditions differ significantly from 24 hours?)

• use the steps of hypothesis testing.

• explain your answers to someone who has never taken a course in statistics. 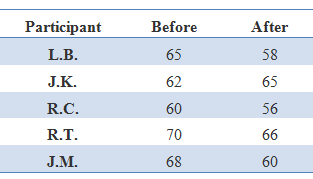 Using the 5% significance level, should we conclude that people are likely to drive more slowly after such a workshop?

• use the steps of hypothesis testing.

• explain your answer to someone who is familiar with hypothesis testing involving known populations, but has never learned anything about t-

• A researcher measures self-esteem in 21 students before and after taking a difficult exam.

• A researcher tests reaction time of each of a group of 14 individuals twice, once while in a very hot room and once in a normal-temperature room.

32. Figure SDifference  for  each  of  the  following  studies:

33. For each of the following experiments, decide if the difference between conditions is statistically significant at the .05 level (two-tailed). 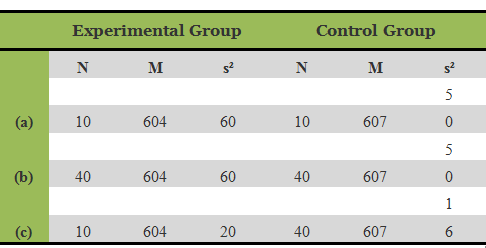 34. Twenty students randomly assigned to an experimental group receive an instructional program; in a control group do not. After 6 months, both groups are tested on their knowledge. The experimental group has a mean of 38 on the test (with an estimated population standard of 3); the control group has a mean of 35 (with an estimated standard deviation of 5). Using the .05 level, what  should  the  experimenter  conclude?

(a) use the steps of hypothesis testing,

(b) explain your answer to someone who is familiar with the t test for a single sample, but not with the t-test for independent means. 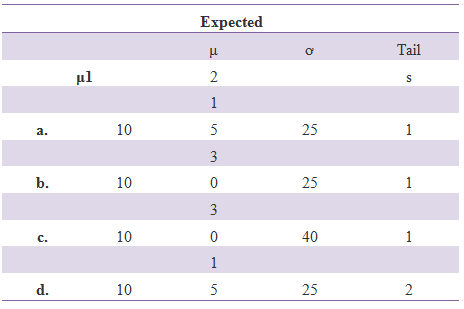 (a)  use the steps of hypothesis testing.

(b) explain your answer to someone who understands everything involved in conducting a t test for independent means, but is unfamiliar with the analysis of variance.

37. Do students at various colleges differ in how sociable they are? Twenty-five students were randomly selected from each of three colleges in a particular region and were asked to report on the amount of time they spent socializing each day with other students. The results for College X was a mean of 5 and an estimated population variance of 2; for College Y, M = 4, S² = 1.5; and for College Z, M = 6, S² = 5. What should you conclude? Use the .05 level.

(a)  use the steps of hypothesis testing,

(b) explain your answer to someone who has never had a course in statistics.

38. Rosalie Friend (2001), an educational psychologist, compared three methods of teaching writing. Students were randomly assigned to three different experimental conditions involving different methods of writing a summary. At the end of the two days of instructions, participants wrote a summary. One of the ways it was scored was the percentage of specific details of information it included from the original material. Here is a selection from her article describing one of the findings:

Explain these results to a person who has never had a course in statistics. Also, using the information in the above description.

• carry out the steps of hypothesis testing.

• Explain these results to a person who has never had a course in statistics.

(Note: This problem is like the Harter et. Al. example in which you are doing chi-square for a single nominal variable. This is not a chi-square test for independence and does not involve any contingency tables.)

40. Stasser et al. (1989) conducted a study involving discussions of three different “candidates” which were described to participants in a way the researchers intended to make the candidates equally attractive. Thus, before analyzing their mean results, they wanted to first test whether the three candidates were in fact seen as equally attractive. Of the 531 participants in their study, 197 initially preferred Candidate A; 120 Candidate B, and 214, Candidate C. Stasser et al. described the following analysis:

“The relevant frequencies of prediscussion preferences.. suggested that we were not entirely successful in constructing equally attractive candidates… [T]he hypothesis of equal popularity can be confidently rejected, X²(2, N = 531) = 28.35, p > .001.” (p. 71).

• figure the chi-square yourself (your results should be the same, within rounding  errors).

• explain these results to a person who has never had a course in statistics.

41. Below are results of a survey of a sample of people buying ballet tickets, laid out according to the type of seat they purchased and how regularly they attend. Is there a significant relation? (Use the .05 level.)

• carry out the steps of hypothesis testing.

• explain your answer to someone who has never had a course in statistics.

42. About how many participants do you need for 80% power in each of the following planned studies, using a chi-square test of independence with p < .05?